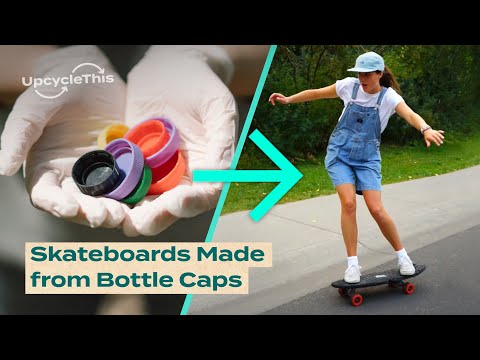 How This Company Makes Skateboards From Bottle Caps

These brothers-in-law collect plastic waste like bottle caps and turn it into gnarly skateboards.

The world has a plastic bottle cap problem. They’re tough to recycle, they’re deadly, and they are everywhere.

In this episode of UpcycleThis, we’re going to dive in. Why are bottle caps such a problem? Why are they so hard to recycle normally? And we’ll talk to the Backcountry Swell, who found a way to upcycle bottle caps into skateboards.

Why Are Bottle Caps Such a Problem?

If you’re outside and look around, chances are you can spot a plastic bottle cap without much effort. You might not even notice because they’re just so prevalent — in fact, plastic bottle caps were the 4th most collected piece of litter during the 2020 international coastal cleanup day.

These bottle caps strewn about our planet are quite deadly. They kill all sorts of marine life in really heartbreaking ways — birds, fish, and sea turtles — whose unique anatomy can create a situation called “bubble butt” when they ingest plastic.

It’s not nearly as fun as it sounds, has nothing to do with twerking, and causes them to float on the surface and either starve or become an easy target for predators. See what we mean? No Bueno.

Why Are Bottle Caps So Hard To Recycle Normally?

Even if people stopped dropping their own bottle caps like they were the hottest mixtape, we’d still have these problems. Because — at least in the U.S. — even if your local recycling program accepts plastic bottles — they likely don’t take the caps that come with them.

That’s because the caps are made from a different type of plastic than the bottle and can cause contamination at recycling centers if they are not properly separated, which costs more money and requires more resources to make it work. and that’s apparently a problem for the richest country in the world so… most simply don’t bother.

The Founding of the Backcountry Swell

Wyatt Remington: “We’d love to skateboard, and ski, and snowboard, and surf there was always plastic. That was just, that had been left around. So rather than sit idly by, we decided to do something about it.”

And do something about it they did. In 201, Mark and Wyatt started the Backcountry Swell and came up with a solution that helps keep those caps and other plastic waste out of landfills.

They turn them into skateboards.

Wyatt Remington: “Since our launch and our inception. About two years ago, we have created over 200 skateboards.”

Wyatt Remington: “Each board really is made from garbage. ”

...It turns out all that plastic waste that basically sits around our planet, well, forever — it does that because it’s hard to break down —it’s durable. And that makes for a pretty nice ride.

Wyatt Remington: “I would say the biggest reason that our skateboards are better than any other skateboard out there is due to their durability. Recycled plastic is incredibly strong. Everybody says that they ride super well.”

How To Turn Bottle Caps Into Skateboards

So how does the Backcountry Swell turn rubbish into rides? Well, the first step is - of course - gathering some trash.

Wyatt Remington: “Our primary avenue is through beach cleanups that we perform, and that's where we find most of our bottle caps and beach plastic we also have found a supplier who can give us large quantities of post-consumer recycled bottle caps. so they — these two avenues, have allowed us to find a steady stream of bottle caps that we can use in our skateboards. ”

Each skateboard produced by the Backcountry Swell requires a little over 2 pounds of plastic. That’s roughly 150 bottle caps per board or over 2,000 straws that no longer pollute the planet.

Once they’ve collected enough, any dirty plastic is cleaned, and then all of it is run through a small shredder to turn them into little plastic chips. Those small chips are then melted and run by another heating element through an extrusion machine and into a mold. After it’s had a chance to cool down the mold is removed, excess plastic is cut off, and you’ve got your deck. Then all it takes is some trucks and wheels and you’re off.

And according to Wyatt, that whole process only takes about 45 minutes.

The Impact of the Backcountry Swell

A complete board from backcountry swell runs for $109, which is just about the same price as a plastic board of the same size from one of the major brands.

But those other boards are eventually going to add to the plastic waste problem. A board from the Backcountry Swell literally does the opposite — removing harmful trash from the environment.

Wyatt Remington: “Since our launch, we have recycled almost one ton of plastic.”

And the more boards they sell, the more plastic they’ll be able to clean up.

Wyatt Remington: “The sales from our recycled products help us to fund even more beach cleanups, which allow us to take even more plastic from the ocean and from other locations where it's polluting.”

If your board breaks? Well, reminder, it’s made out of recycled plastic. The Backcountry Swell will take it back and recycle it back into its former glory.

Wyatt Remington: “They can really go on forever and ever. If a skateboard breaks and we have a no-questions-asked return policy where all of our skateboards can be recycled into a new skateboard and sent back to the original owner.”

So, to recap — deadly, dirty bottle caps that most local recycling streams don’t accept because they can’t be recycled — can actually be recycled. And sometimes into really cool stuff, like a skateboard.

Wyatt Remington: “Plastic pollution isn't new news. This is something that's been around for a really long time and affects almost everybody in the whole world. As a result of this, there's something that everybody can do to remove the amount of plastic pollution in their area, whether this be cleanups or reducing the amount of plastic that they use themselves.

All because two outdoorsy brothers-in-law saw a problem and wanted to do something about it.

Wyatt Remington: “When people get involved, that's when the real change happens. It's not when companies step in to do things, that's when individuals get involved to help lower the amount of plastic pollution in their area.”

What Can You Do To Recycle Bottle Caps?

Want to get involved? As Wyatt said, a great place to start is organizing or participating in a community cleanup.

And for your own plastic bottle caps? The short answer is to stop buying them — but we live in reality and things happen where that’s not always possible.

Recycling them can be a little confusing depending on where you live. So take a look at Earth911 — enter your zip code and the type of material you’re looking to recycle to see what options are available near you. Most bottle caps are made out of number 5 plastic so that’s what you’ll be looking for in this case. For me in Philadelphia, the recycling program does take bottle caps but asks you to remove them from the bottle before putting them in your bin. Where I grew up in Virginia also takes plastic bottle caps but asks that you put them back onto a bottle after it's cleaned before recycling. So just take a look and figure out what the rules are around you.

UpcycleThis is a series that examines the world’s massive waste problem and inspires solutions by highlighting changemakers around the world who are finding creative ways to use hard-to-recycle materials. Watch more episodes of UpcycleThis.

Watch how this man takes discarded face masks and recycles them into screwdriver sets.