Underwater Mating Is No Easy Feat

While watching underwater video of a male turtleheaded sea snake attempting to court a female, Jenna Crowe-Riddell noticed something shocking but not uncommon: the male got lost.

After pursuing the female sea snake for several minutes along a reef off the coast of Australia, the male ended up about a meter (3 feet) away from the female. Suddenly, he had no clue where the female was located. For the next 10 minutes, Crowe-Riddell, a postdoctoral researcher at the University of Michigan, watched as the male swam in circles, before ultimately giving up and losing the female entirely.

“How do these snakes even find each other underwater? And once they do, how do they stay in contact?” Crowe-Riddell asked, wondering how these descendants of land snakes adapted to the challenges of mating underwater.

Crowe-Riddell may have found an answer, or potentially several, outlined in a study published in June in the Biological Journal of the Linnean Society. In the study, she identifies multiple sexually dimorphic features — attributes exhibited in only one sex of the species — of the turtleheaded sea snake (Emydocephalus annulatus) that she hypothesizes stem from the evolutionary pressures of underwater mating.

Understanding what makes underwater mating so difficult for these sea snakes begins with their evolutionary ancestor: the land snake. To locate each other above ground, snakes primarily use vision. But this becomes blurry underwater. A snake’s tongue, used for its sense of smell, also doesn’t function the same underwater, where odor molecules disperse more quickly than in the air. 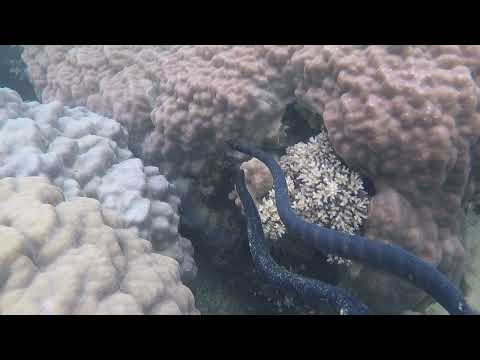 Although limbless, mating for land snakes is surprisingly straightforward.

“On land during mating, males will often lie on top of females. We think this provides some type of stimulus to the female, and it also means if she moves, he moves. He’s right on top of her,” Crowe-Riddell said.

Buoyancy comes into play underwater, adding another challenge to the sea snakes’ restricted senses of sight and smell. Although turtleheaded sea snakes can swim and control their buoyancy to a certain extent, doing so while lying on top of a female for a prolonged period is considerably challenging.

Due to their impaired senses, turtle-headed sea snakes are known to attempt to mate with sea cucumbers or even a rope dragged through the water. A 2005 study on turtleheaded sea snakes, published in the Journal of Behavioral Ecology and Sociobiology, found that during courtship, 20 of the 31 males observed eventually lost contact with the female. After losing contact, they would often swim to any other black object, such as a fish or a diver’s fin, and attempt courtship again.

Crowe-Riddell said she doesn’t know of any other animal with such a high rate of courtship failure.

The most prominent adaptation for underwater sex that she identified was an increased amount of a kind of touch receptor, known as a scale sensillum, in a variety of places on the snake’s body. The receptors look like small transparent and white dots, almost visually comparable to a pimple. While all snakes have scale sensilla on their faces, turtleheaded sea snakes have unusually large sensilla, and males have even larger ones. They were large enough that Crowe-Riddell could observe the difference in receptors on the male and female specimens with her naked eye.

“The snakes engage in this intertwining during courtship, and without limbs, you can imagine it’s quite hard to orient,” Crowe-Riddell said. “It’s just a tube, how can you tell which is the head end and which is the tail end? So they use these receptors over their body to do this.”

In the study, Crowe-Riddell also describes scale sensilla all over the body of the males identical to the face sensilla, but says there might also be a non-sensory function to these body sensilla.

“I think their non-sensory function might have something to do with gripping females during mating; sort of coil around the female,” she said, adding it may help fight the buoyancy problem.

Crowe-Riddell’s study also describes a rostral spine, a small protrusion on the front of a mature male snake’s snout. Originally this rostral spine was thought to be for digging in the sand, but is now thought to be part of the turtleheaded sea snake’s courting process.

“[The male snake] will swim after the female and excessively prod at her with this rostral spine. He will even try and flick in-between the scales. With any reptile the scales are hard and insensitive, but between the scales is this soft skin, which I would imagine is quite sensitive,” Crowe-Riddell said.

“So that made us think maybe this has a different function. It probably is to stimulate the female, as opposed to giving feedback to the male,” Crowe-Riddell said, adding that the two are not entirely mutually exclusive.

“If she doesn’t do that, the male can’t insert the penis. I think that’s where the rostral spine comes in in this species, where he has to impress the female,” Crowe-Riddell said.

The other theory is that the role of the rostral spine is not for courting but inducing stress. Instead of the male aiming to please the female by following her and prodding with the rostral spine, this theory proposes the male is intentionally stressing out the female in an effort to cause cloacal gaping.

“You can look at it two different ways, but I think it’s going to be interesting to pursue what selective pressures are on the female for snake mating,” Crowe-Riddell said.

“There is also some discussion that they could be quite social,” Crowe-Riddell said.

She said that when turtleheaded sea snakes are caught, they are often found with the same group of snakes each time. This may be linked to their increased sense of touch, Crowe-Riddell said, but added this theory has not been tested.

Turtleheaded snakes get their name, unsurprisingly, from the shape of their head. The combination of the snake’s blunt rounded head with a fused scale along the mouth creates a feature that looks similar to a turtle’s beak.

This feature’s utility goes beyond simple name purposes, though. This “beak” sets turtleheaded sea snakes apart from most other snake species, as it has rendered them no longer predators. The beak is used to scrape fish eggs off coral, which is their only source of food.

Due to this specialization for eating fish eggs, turtleheaded sea snakes have lost most of their venom, fangs and teeth.

“They don’t need venom anymore. They’ve managed to exploit a completely different resource that not many other snakes, even land snakes, use: fish eggs,” Crowe-Riddell said.

While turtleheaded sea snakes are not considered a threatened species by the IUCN, Crowe-Riddell said it’s unknown if sea snakes as a whole are threatened from a global population perspective. She noted that over the past decades, there has been a huge sea snake population crash in Ashmore Reef off the northern coast of Australia. The reason for these population crashes remains unknown, although it may be due to habitat degradation of coral reefs.

Sea snakes are also threatened by overfishing and bycatch in the Gulf of Thailand and off the coast of India. But Crowe-Riddell said more research is needed to fully understand the threats.

This story was originally published in Mongabay on August 5, 2021. NowThis has published this story with permission.