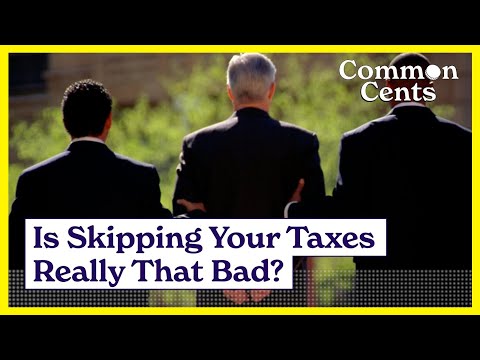 What Happens If You Screw Up Your Taxes

What happens if you don’t give the IRS what they want? What if you accidentally screw them up or forget to file? And where’s all this money going anyway?

The bees are buzzing, the flowers are blooming, and the IRS is looking at their watch and tapping their foot because it’s tax season, and this is all they got.

But what happens if you don’t give them what they want? What if you accidentally screw them up or forget to file? And where’s all this money going anyway?

The topic of taxes is a…taxing topic, so here to explain the ins and outs is personal finance creator Vivian Tu, better known as YourRichBFF on social media.

Where do taxes go?

So first of all, how do we know our tax dollars are actually going towards meaningful initiatives and not just making the White House’s bowling alley bigger and bigger every year?

Some initiatives include technology and science, public schools, parks, Medicare, and highways—just to name a few. So if you’re putting off filing, not only are you withholding funds from important initiatives such as these, but you’ll also land in some hot water.

NerdWallet notes, “If your return is more than 60 days late, the minimum penalty for not filing taxes is $435 or the tax you owe, whichever is smaller.”

However, if you’re expecting a tax refund, the failure to file penalty typically doesn’t apply. In other words, if you’re owed money, the IRS can wait, but if you owe money, they absolutely cannot.

How to get a 6-month extension to file taxes

If the tax deadline doesn’t line up with your schedule, and you know you won’t be able to file in time, you can get up to a six-month extension to file, but you have to file an extension through the exhilarating IRS website.

If you’ve failed to get this extension, failed to file, failed to pay entirely, or lied about your return, well, buckle up baby, because things can get a little scary.

Jersey Shore’s “The Situation”, got himself into a situation by doing just that. He was locked up for eight months for tax evasion. He submitted fabricated tax returns on almost $9 million. So if you’re scared about owing a lot in taxes, it’s important to understand that the government is willing to work with you.

Tu: “The government is actually much more flexible when it comes to, you know, not having enough money to pay your taxes. They would actually rather you file and then put you on a payment plan or even just have you say, like, ‘Hey, like I don't have the money right now,’ but like let's work something out versus not filing at all, which can actually be a jailable offense.”

As far as making a relatively minor mistake on your taxes goes, it’s not the end of the world.

Tu: “Typically when regular-shmegular, everyday people like you or me make a mistake on our taxes, if the IRS comes back and audits you and finds that there is a discrepancy, this is a civil issue. They will literally essentially send you a bill for the difference and a little bit of interest and ask you to pay that. As long as you pay that bill, or even get put on a payment plan for that bill, you'll be fine. You're not going to jail, but it's more of, like, the very egregious `We're off by millions of dollars,’' type situation where you're seeing people being, you know, seeing legal action really coming against them and then potentially going to jail.”

The wealthy can often get away with skirting taxes

But so often the wealthy do get away with skirting taxes, and the onus to pay for American initiatives falls on the rest of the country. ProPublica notes, ‘America’s billionaires avail themselves of tax-avoidance strategies beyond the reach of ordinary people. Their wealth derives from the skyrocketing value of their assets, like stock and property. Those gains are not defined by U.S. laws as taxable income unless and until the billionaires sell.’ Furthermore, according to a 2021 Treasury Department report, the 1% are responsible for an estimated $163 billion in unpaid taxes every year.

Tu: “There's no reason why any human being needs a billion dollars and transparently, I think if they were taxed, they wouldn't even notice the money was missing. A wealth tax on ultra wealthy billionaires could help provide the necessary funding to support so many key initiatives across federal state and local governments while taking the burden off of hard-working individuals, being taxed on their working wages. You know, I think it is very challenging to pass, to pass broad-based reform. You're gonna need to an extent bipartisan support and you know, without getting too political, a lot of those ultra wealthy folks and ultra wealthy companies have their hands across the aisles in terms of the political spectrum and, you know, supporting and funding a lot of those campaigns. And when your biggest donors, you know, interests are not to tax billionaires, why would you go ahead and do that when they were the one who funded your campaign?”

So until Congress passes some massive tax overhaul that focuses on benefiting the many instead of a few at the top, you’ll need to find a way to lobby a senator without burning a hole in your pocket, which is impossible, so you’ll just need to try your best to stay out of hot water.

Rules to file your taxes

While the system is far from ideal, just keep in mind a few simple rules when it comes to filing your taxes:

Common Cents is a finance show that answers everything schools didn't.Watch more episodes of Common Cents.

Why Doing Taxes Is So Hard In The U.S.

Tax season is here, and if you aren't rich enough to avoid worrying about it, you probably have a few questions about filing — here's what you should know.