WASHINGTON (AP) — President Joe Biden is commemorating Transgender Day of Visibility by celebrating prominent transgender Americans and advocating against what his administration terms “dangerous anti-transgender legislative attacks" that have passed in statehouses across the country.

WASHINGTON (AP) — President Joe Biden is commemorating Transgender Day of Visibility by celebrating prominent transgender Americans and advocating against what his administration terms “dangerous anti-transgender legislative attacks" that have passed in statehouses across the country.

Biden on Thursday is announcing new measures aimed at making the federal government more inclusive for transgender people, including a new“X” gender marker on U.S. passport applications beginning on April 11 and new Transportation Security Administration scanners that are gender-neutral.

The Democratic president's administration is working to expand the availability of the “X” gender marker to airlines and federal travel programs and will make it easier for transgender people to change their gender information in Social Security Administration records.

At airports, there will changes to screening scanners as well as the use of an “X” for travelers going through Precheck who do not identify as male or female. TSA officers will receive new instructions on screening intended to make procedures less invasive. The TSA will work with airlines to promote the acceptance of the “X” gender marker.

“Transgender Americans continue to face discrimination, harassment, and barriers to opportunity,” Biden wrote in a proclamation marking the day. “In the past year, hundreds of anti-transgender bills in States were proposed across America, most of them targeting transgender kids. The onslaught has continued this year. These bills are wrong."

Biden also planned to release a video message to transgender Americans on Thursday.

“Jeopardy!” champion Amy Schneider, the first openly transgender winner on the quiz show, will visit the White House on Thursday to meet with second gentleman Doug Emhoff. Emhoff, along with Admiral Rachel Levine, the assistant secretary for health at the Department of Health and Human Services, will also host a conversation with transgender kids and their parents at the White House.

In Florida, Education Secretary Miguel Cardona will meet with LGBTQ+ students in the wake of the state's new law that bars instruction on sexual orientation and gender identity in kindergarten through the third grade.

Republicans argue that parents should broach these subjects with children. Democrats have said the law demonizes LGBTQ people by excluding them from classroom lessons.

“Their conversation will focus on the impacts of Florida’s so-called ‘Don’t Say Gay’ bill, students’ experiences at school and, in particular, support for LGBTQI+ student mental health and well-being,” the White House said.

HHS, the White House said, will also be the first agency to fly a trans pride flag. 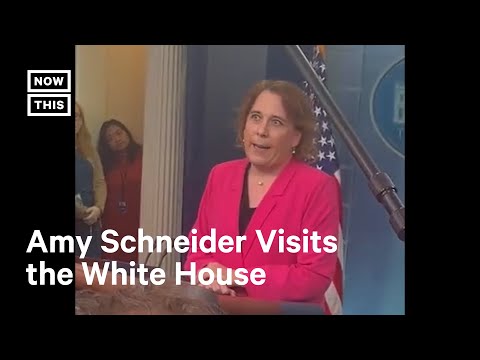