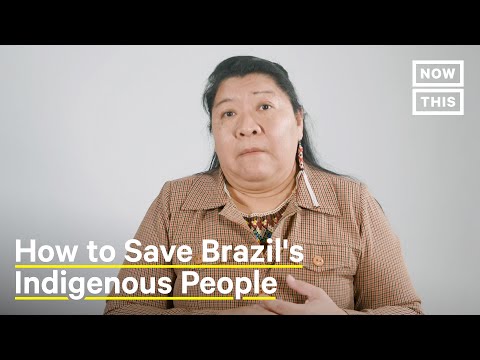 Opinion: Brazil’s 1st Indigenous Congresswoman Wants Her Government to Save the Amazon

Joênia Wapixana is a lawyer, Brazil’s first Indigenous congresswoman, and president of the National Commission for the Defense of the Rights of Indigenous Peoples. Wapixana started her term in February 2019. She has vowed to fight for Brazil’s Indigenous people and their land, which President Jair Bolsonaro has threatened with economic and commercial development plans.

More than 900,000 Indigenous people live in Brazil— about 98% of their land lies within the Amazon, where they continually protect and preserve the land.

Deforestation in the Amazon surged 30% between August 2018 and July 2019, and 2019 saw an 80% increase in fires in Brazil— more than half of which were in the Amazon. Experts attribute the widespread burning to weakened protections under Bolsonaro and illegal deforestation.

Wapixana spoke with NowThis about her new role, why she’s motivated to protect Indigenous lands, and what more people should know about her culture and community. This is an edited and condensed version of the conversation.

NowThis: Tell us about the Wapixana people and their culture.
Wapixana: Wapixana people are [a population of] seven thousand in all Brazil. The Indigenous have a lot of traditional knowledge, and live very close to rivers and have a small village. And the Indigenous Wapixana live together with others.

NowThis: Why is the Amazon rainforest important to indigenous people?
Wapixana: The Amazon is my home— is my life. Not just for me, for my quality of rights and my quality of lands. Amazon means “the everything.” It’s the reason for Indigenous peoples who
have traditional knowledge and understand the forest to become us and the forest to
become the life is essential for the planet to protect the Amazon to continue the life in the
planet.

NowThis: What is at stake for the indigenous people in Brazil if the Amazon is destroyed?
Wapixana: The Amazon is at risk now. It is a responsibility not just for Indigenous people, but for everybody who wants to survive on the planet. We need to respect the forest, respect the biodiversity, respect the Amazon. We need to take care of this— you need to become more responsible, and take care to protect the Amazon like Indigenous peoples. You need to understand, you need to become more sensible and make some compromises to change it. More bad human behavior will have to change. If not, the Amazon will disappear. And it is a consequence not just for those who live in the Amazon, but for our planet.

So the first thing that people [should] understand is that Brazil and Indigenous people are at risk. [T]he indigenous and the government [can] work to improve the law and policy and give more protection.

NowThis: Why do you think it's important for indigenous people to keep their land?
Wapixana: Because the land means life for everybody. We try to teach [the] next generation to take care of the forests, the biodiversity, the water, the kinds of values you need to show for planets. You need to calibrate the behavior; you need to teach but live according to nature. So it is very important not just for Indigenous [people], but for everybody who lives here.

NowThis: How have you stood up against President Bolsanaro to protect your land and your people?
Wapixana: I am in [National Congress]. So I try to write good law. And try to monitor President Bolsonaro. We try to ask them—the government—to do the action, the policy according to our national Constitution. Now, I try to improve the law to protect more Indigenous land. Try to create one front. This front, becomes stronger to try to call different parameters to face and try to show what's the matter. [He] needs to change this behavior and change the conception about Indigenous rights because Indigenous rights are in [protected in] the national Constitution.


Must Watch
In This Together: Teens Help At-Risk Individuals, Photo Series Celebrates Black Girls
Our Newsletter