With stay-at-home and lockdown orders being implemented throughout the world, countries including the U.S., Italy, France, and Australia have seen an uptick in domestic violence reports.

A surge in domestic violence reports have poured in around the world over the last few weeks, as people are spending more time inside with family and significant others during the coronavirus pandemic.

When more orders to stay inside were introduced globally to help curb the spread of COVID-19, experts on domestic violence raised flags about the isolation impact on people who are stuck inside with their abuser. Being able to go to school or work can be a much-needed break for victims, according to officials at the National Coalition Against Domestic Violence.

In New York City, where millions of people have been instructed to stay inside as much as possible, online resource NYC Hope reportedly saw an increased number of visitors to its website between March 18 and 30. The website is dedicated to helping victims of domestic violence, and according to Gothamist, it typically sees an average of 95 visits per day. During that week in March, the website had 1,240 visits—354 of those visitors were new users. On April 3, a top aide to Gov. Andrew Cuomo said in a press conference that New York State Police have reported an increase of 15 to 20% in domestic violence calls.

Other parts of the country have also seen the spike in cases. In California, Fresno County Sheriff's Office reportedly saw a 77% increase in domestic violence reports during the week of March 16 to 22, compared to the week before. The area’s domestic violence shelter, Marjaree Mason Center, said it received a 30% increase in crisis calls that same week. In the state of Washington, the Seattle Police Department reported 21% more domestic violence calls in March, when a stay-at-home order was issued.

In other countries, the uptick of domestic violence cases have also been reported.

Women in France have reportedly been encouraged to use “code words” during trips to pharmacies and drug stores to safely notify someone of the abuse they’re enduring. Officials in Paris said police intervention in domestic violence cases increased by 36% since the country’s lockdown orders were enforced. In Italy, an association that supports abuse victims told NBC News that since the lockdown order started in March, it has seen a sharp uptick in messages from victims. And in Australia, the government said Google searches for domestic violence resources are higher than they’ve been in five years during the coronavirus crisis.

According to the CDC, nearly 1 in 5 women and 1 in 7 men in the U.S. report experiencing physical violence by an intimate partner in their lifetime.

The National Domestic Violence Hotline wrote about the possible harmful effects of COVID-19 on victims, saying that abusive partners may use the coronavirus pandemic to instill fear and control their partners. Specifically, the hotline mentions abusers withholding necessary items like hand sanitizer and telling their partners misinformation to frighten them and keep them from seeking medical attention, even if they’re sick. But with the epidemic forcing businesses to close, some shelters for victims are also closing. Five Family Justice Centers in New York City, which are typically a confidential outlet for victims, temporarily closed.

The National Domestic Violence Hotline encourages victims of abuse to reach out to their services by calling 1-800-799-7233, or text LOVEIS to 22522. If you are unable to reach out, online resources are available including safety planning. 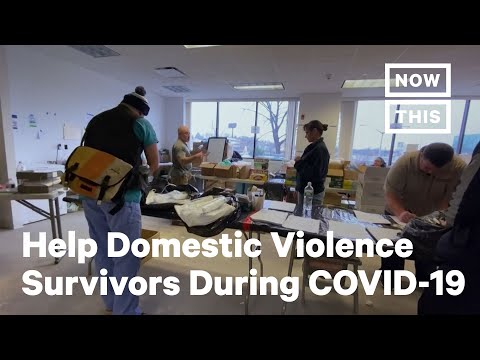