This Program Provides Mentorship to Students With Learning Disabilities

Growing up, David Flink didn’t know anyone who learned like him. As a student with dyslexia and ADHD, he had a hard time concentrating in school. By the time Flink started college at Brown University, he “had never met a successful person who was neurodiverse,” Flink told NowThis.

That realization inspired him to found Eye to Eye, a nationwide organization that matches middle school students who learn differently with high school- and college-aged mentors who share similar experiences.

Nearly 25 years later, the organization is still “delivering the same mission of improving educational experience and outcomes of neurodiverse young people — engaging them and their allies in a movement for a more equitable, inclusive society,” Flink explained. 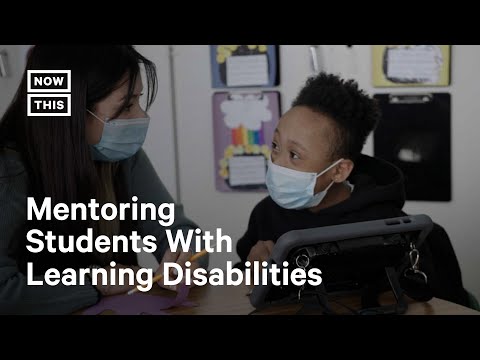 Studies have shown that at least one in five students in the U.S. has learning and attention issues, according to the National Center for Learning Disabilities. These can include dyslexia, dyscalculia, and ADHD.

Eye to Eye introduces middle school children with learning disabilities with mentors to help them feel accepted and engaged in the classroom. Flink credits teachers and social workers for identifying students who would benefit from more individualized mentorship.

Tara Stanley, a social worker at KIPP Philadelphia Preparatory Academy, says she has fallen in love with the program after seeing it succeed. “We have these mentors come every single week, and children get to anticipate that this is a person who loves me, and who cares for me, and who just wants to be there with me. That is something that is amazing,” Stanley said.

“It allows that young person to see a different version of their future than perhaps they've been telling themselves,” Flink said. “There's a magic that happens when our very cool college- and high school-age mentors come and step into the lives of these young people and say, ‘Hey, look, I learn like you do. I made it. So can you, and I'm gonna show you exactly how.’”

Janelle Buday and Jai’la Boston know the experience firsthand. Buday is a college student at Temple University who mentors Boston, a middle school student at KIPP.

Boston says she likes doing crafts and playing games with her mentor. And for Buday, the bond with her fellow mentors and the students is very valuable. “If you're not in an environment where you can learn differently, and be a self-advocate for yourself in that way, and know that you are, like, valued as a student, having a relationship with someone who is also a student in that same boat feels really validating,” said Buday.

But no matter what else they are getting out of the experience, participants benefit the most from simply spending time together, Flink said. He explained, “It's a space where we're not judging these young people. They don't have to show up in a typical way. We're giving them space to exercise their emotions, to exercise their feelings, and to talk about what they wish for in their future.”