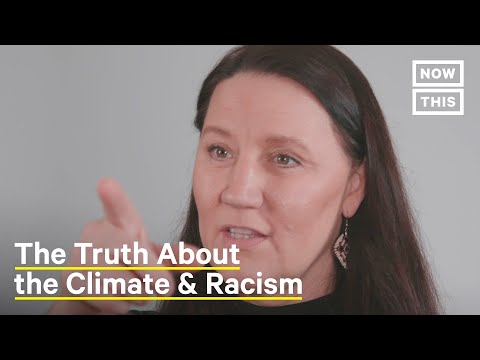 The human rights lawyer wants more people to “live in kinship with the rest of creation.”

Sherri Mitchell is an Indigenous rights lawyer and activist who has fought for environmental justice for more than 25 years. Mitchell was born and raised in the Penobscot Nation, a federally-recognized native tribe in Maine, where she witnessed the impacts of the climate crisis firsthand. Mitchell talked with NowThis about elevating the voices of Indigenous people, the importance of peaceful demonstrations, and the climate crisis.

NowThis: What made you start fighting for environmental justice?
Mitchell: I think the thing that really got me moving in regard to environmental justice was growing up on an island nation where we were prohibited from being able to actually go into the water that surrounded us. When I was a child, going into the river was one of the things that I would get into the most trouble for with my family, because it was so contaminated that people that would go into the water would get sores on their bodies. And so there was this deep grief in the community about not being able to interact with the waterways that surrounded us in ways that have historically defined our culture.

NowThis: What does environmental justice mean to you?
Mitchell: Environmental justice is a term that is thrown around quite frequently. And I think that a lot of people have this idea that it's this separate component that people need to be working on. But for us, environmental justice is really about harmonised relationship, what we call Psilde N’dilnabamuk. It's about living in kinship with the rest of creation, with all life. So we understand that we have a certain responsibility to honor the right, that all other living beings have to continue to exist, uninhibited, unmolested in their natural environment, just as we do in ours.

NowThis: Do you think Indigenous people are being heard?
Mitchell: ...Oftentimes the voices that are allowed to come forward are not the voices that we most need to hear. So for the past 25 years, I've been working with indigenous spiritual leaders who are the ones who are really responsible for maintaining the traditional indigenous way of life, what we call skejinawe bamousawakon and those voices are not allowed at the table. And so we have these keepers of our traditions who have been kept out of the discussions because it's only the elected leaders or those who have been positioned by the colonial governments to be authorities who are allowed to speak at some of these really critical meetings that are determining what happens in indigenous communities.

NowThis: Why are peaceful demonstrations important?
Mitchell: So we have to be engaging in active nonviolence. We have to be able to be addressing some of these challenges in ways that support life rather than foster death. And I think that one of the things that has been deeply ingrained into people's minds is that in order to overcome a challenge, we have to conquer it. So this conquest mindset is one of the sicknesses that is a remnant of colonization. That we have this mindset that we have to conquer everything that comes before us ...And so if we don't have the right voices coming to the forefront, and if those voices aren't really honored and respected, then we're not going to see the type of movement that's necessary in order for us to be able to sustain life on the planet.