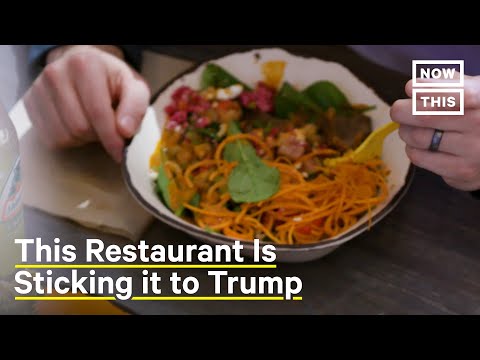 The restaurant’s chef describes Immigrant Food’s offerings as “20 restaurants in one menu.”

The restaurant Immigrant Food based in Washington, D.C. serves a diverse menu of culinary offerings on the same street as the White House. The business opened in 2019 and celebrates the stories of today’s and past immigrants. Co-founders Enrique Limardo, also the restaurant's chef, and Peter Schechter spoke with NowThis about the origins of their restaurant. Below is an edited and condensed version of the conversation.

On the inspiration for name and menu

Schechter: We wanted to have a restaurant that screamed immigrant pride right from [the] gate.
Limardo: It's like 20 restaurants in one menu. I just fell in love with the idea because just the name is so powerful and is so meaningful.
Schechter: Our menu is like—it's not obvious. It's not steak and cheese. How do you bring different fusions of foods that weren't obvious marriages?

The owners say they want to counteract growing anti-immigrant sentiment in the U.S.

Schechter: Immigrants have been the economic, cultural engine of America. I think that we ought to be clearly taking a stand and embedding the notion of what we stand for right in the business. That's why we're called immigrant food, not something else.

Limardo: He [Schecter] brought the idea, and I just fell in love. The challenge to create a menu that is like combining 20 different restaurants in just one place at the beginning was like, this is going to be so difficult to create something that connects everything and tries to show people different cultures through the food... So I start doing research about all the immigrations that compounds the heritage of America. And I start with a supermassive piece of paper. Write it down all the immigrations by countries, by percentage, and then like different ingredients from every single country, and try to connect those.

Schechter: I'm lucky because my life is varied. I write op-ed for a number of newspapers. I'm a columnist for a political risk platform called Brink. I have a podcast that talks about flawed policy issues like global affairs. Both of my parents were immigrants. You know, on the Statue of Liberty, it says, ‘Give me your huddled masses.’ I mean, you know, this country was never created to bring in rich people.

It was created to bring in people that were being persecuted either because they don't have the economic means or because they're being persecuted for religious beliefs or political beliefs. And so that was where my mom was. She was being persecuted for her religious beliefs… and it just felt to me like I needed to do more to celebrate her memory. And I've been involved in restaurants for a long time and have been involved in politics and communications for a long time. And I felt like, why don't we marry those two things together.

Schechter hopes to bring their activism-focused business model to other U.S. cities

Schechter: We've become such a polarized society in many, many respects. There are people who want to counteract things that we've fought for for many years in this country. And I just think that it's the role of business to get involved in that fight. And so we decided not to do it in a way which a lot of businesses do and I completely respect, which is to take part of your profits and then contribute a portion of that to a cause. We decided to embed the cause right in with the business.