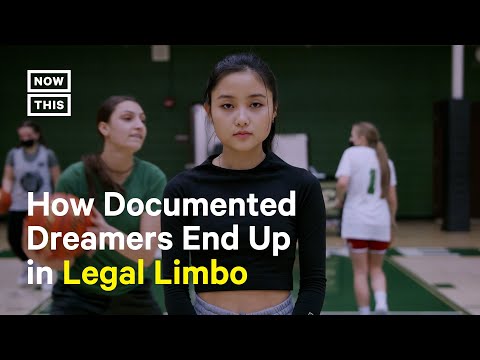 Meet the Documented Dreamers Who May Still Face Deportation

How documented DREAMers end up in legal limbo

Currently there are more than 200,000 young immigrants living legally in the U.S. that will find themselves in legal limbo when they turn 21.

Documented DREAMers are immigrants who have grown up in the U.S. as dependents of long-term visa holders without a clear path to citizenship.

When dreamers age out of their status as dependents at the age of 21, they often face the threat of self-deportation a.k.a family separation.

In 2004, the Yoon family migrated from Korea to the United States. Byung Yoon originally arrived on a student visa and after some time acquired an E-2 visa, which allowed him to enter and work in the United States based on an investment in a U.S. business.

The visa also allows his wife and three children to live in this country. The visa has to be renewed every 2 years and can be renewed indefinitely.

Hilary is currently 18 years old, a senior in high school, and must consider her path to ensure she does not age out of her legal status. Otherwise she will either have to choose between living in America illegally or returning to Korea.

Dip Patel is a documented DREAMer and the founder of Improve the Dream, an organization that raises awareness and advocates for young immigrants growing up in the United States.

The organization also tries to enlist the help of government representatives to create change through legislation.

Another hurdle to climb is that if documented DREAMers are lucky enough to be approved for a student visa, although growing up in America, sometimes they are required to pay tuition as an international student

International student tuition tends to be higher than in-state and out-of-state tuition, so families are often faced with the decision of sending one child to school and finding alternate options for the other child.

Created during the Obama administration, programs like DACA, Deferred Action for Childhood Arrivals, provide help for some immigrants through way of work permits and protections against deportation. However, DACA’s core focus is on immigrants who arrived illegally, so there’s no protection for documented DREAMers.

A bill introduced in the Senate and House is trying to change this by providing a pathway to citizenship for documented DREAMers who are under 21 and those who have already aged out of their legal status.


Must Watch
In This Together: Musician Entertains Cooped Up Kids, Model Creates Inclusive Face Masks