In an op-ed for NowThis, Sen. Elizabeth Warren addresses Americans who may feel discouraged this week after the rushed confirmation of Supreme Court Justice Amy Coney Barrett: “There has never been a more righteous time to get in this fight.”

Mitch McConnell’s to-do list has one thing on it — in large, thick font: hold onto power at any cost. Covid-19 cases are rising and our economy is on the brink of collapse — but he refuses to pass a stimulus package because relief for American families isn’t on his list. Instead, he rammed through a Supreme Court confirmation in the middle of an election.

Here are 5 things every American should know about it:

1. Why this confirmation is good timing for Republicans who want to tear down the Affordable Care Act.

3. How the confirmation hearings were a sham.

4. That brings me to #4: Why this nomination is a win for dark money.

5. Why this nomination doesn’t reflect the views of the majority of our people.

So, that’s the bad news. Here’s the good news: this election, we tell them we’re watching. We’ve seen what they’ve done to our democracy and we’re fighting back. And look — I get it, these fights are hard. At times it can feel hopeless. But remember, hope is not given to us — hope is created by us. So we can’t give into fear and we can’t back down. Because the side that is undermining our democracy wants you to despair.

So I urge you — dig a little deeper. There has never been a more righteous time to get in this fight. The White House, the Senate, the House, and every single state and local election matters in protecting the values we share. Vote, vote vote — and organize your community to vote. Our democracy depends on you staying in the fight.

Watch the video version of this op-ed here: 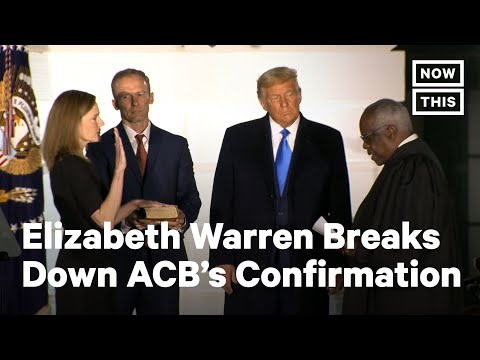 A Supreme Court justice hasn’t been confirmed with the support of just one party since 1869, according to The National Journal. Barrett is the 220th federal judge confirmed under President Trump and GOP Senate Leader Mitch McConnell.