The Iowa Caucuses: What They Are and How They Work

The Iowa Caucuses kick off in February—here’s what to know about the complicated but consequential events. 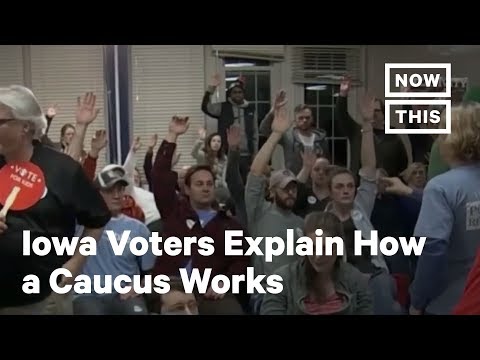 Why Do The Caucuses Matter?

The Democratic presidential candidates have been campaigning for months, but their path to the White House really hangs in the balance in the primaries.

The 2020 Democratic presidential primaries kick off on February 3 with the Iowa caucuses. To determine the Democratic candidate, every U.S. state and territory will have a series of primaries, ending with the U.S. Virgin Islands in June.

Caucuses will be held in Iowa, Nevada, North Dakota and Wyoming as well as American Samoa, The Northern Mariana Islands, Guam, and the U.S. Virgin Islands. Although the caucuses are more involved than the straightforward balloted primaries, they play a big part in deciding on a candidate. And since the Iowa caucuses come first, whichever candidate does well there can gain a lot of momentum on their way to the final nomination (Barack Obama and Jimmy Carter both fared well in Iowa during their campaigns).  But it’s not always a final predictor: Ted Cruz won the Republican Iowa Caucus in 2016. And yes, there are Republican candidates running against President Trump.

The Iowa caucuses take place at more than 1,600 precinct locations around the state. These caucuses determine how many national party convention delegates are allocated to each candidate. Any Iowans registered in their party, and who will be 18 years old by Election Day, are eligible to participate in the caucuses. This is the first year that 17-year-olds who will turn 18 by November will be able to participate, based on changes that Iowa made last year. Once voters head to their precinct location, the caucus chairs will start the proceedings.

How Does a Caucus Work?

To vote, participants physically stand in a group designated for a candidate. Any candidate with at least 15% of the votes is considered “viable” and awarded delegates — and voters that chose a viable candidate are then locked into their vote.

Supporters for non-viable candidates can then decide to join a viable group or a group that needs more members to be viable — or they can try to convince others to join their group to make it viable. They can also just stick with their group as is. In this round, campaign representatives will likely be around to convince participants to support a certain candidate. Candidates have tried to strategize with one another in the past to advance in different grouping rounds — a strategy 2020 candidates are also using.

Though there have historically been more “alignment” rounds, or rounds where participants can decide to move to support a different candidate at Iowa caucuses in the past, this year will only have two.

Candidates will also be able to report the results of both the two rounds to try to improve their numbers in the second round. This is a key difference this year. It's easy to imagine a scenario where the winner of the first round ends up in second place in the final tally — which could have people raising inaccurate theories if they don't understand why.

Does Anyone Win The Caucuses?

The grouping and outcome at the caucuses translates into “State Delegate Equivalents.” Those delegates eventually correlate to a certain number of national delegates a candidate gets at the Democratic National Convention in July.  Though the Iowa Democratic Party doesn’t declare an objective winner of the caucuses, the candidate with the most State Delegate Equivalents effectively wins. The overall primary is a race to win 1,990 delegates, and Iowa has only 41 to give. They're awarded proportionately, so the second, third, and maybe even fourth place finishers can all win delegates.

Though caucuses may be more costly and involved than simple primary votes, some states, including Iowa, continue to use them, saying it allows space to discuss each candidate.

The caucuses will undoubtedly be reported upon heavily starting on Monday, so their results will be hard to miss. You can learn even more about caucuses from the Muppets below: